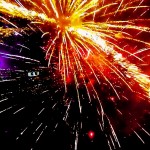 A recent video filmed by Jos Stiglingh is about to give many amateur drone operators some very bad ideas. The video, filmed with a GoPro Hero 3 Silver, shows the view from a DJI Phantom quadcopter drone flying through a major firework show in West Palm Beach, Florida.

The video is incredibly breathtaking, but the only problem is that all fireworks shows are protected under Coast Guard established safety zones. The punishment for violating these safety zones is a $40,000 fine and for willful violations, it is a Class D felony, punishable by at least 5, but no more than 10 years in prison. This becomes even more problematic now that some quad-copter video drones can be found online for under $50 (click here for more details)

Do you think it was worth it;