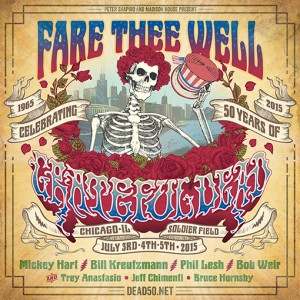 The Grateful Dead are reuniting for a 3 day concert in celebration of their 50th anniversary. The concert will take place over the 4th of July weekend at Chicago’s Soldier Field, Trey Anastasio from Phish will be filling in for iconic leader Jerry Garcia (who passed away in 1995).

CNN Money reported that “The Grateful Dead’s ‘Fare Thee Well’ show at Chicago’s Soldier Field will be the last performance ever with the original members of The Dead, according to band member Bob Weir.”

Please share with anyone else who loves The Dead;

Your Favorite Movie Dance Scenes Have Just Been Synced To ‘Uptown...