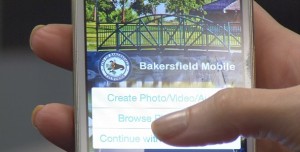 Bakersfield’s revolutionary new mobile app is now one of the fastest growing civil app in America.

Since its recent launch, the app has already seen over 2,000 incidents reported on it.

The free app is a quick and simple way for people to report problems like graffiti, potholes and illegal dumping around the city.

The app also allows people to add photos, videos and a location in the complaint.

The app was even recently awarded the Innovation Award at the Kern County 2014 Regional Award of Merit Recipients.

What do you think about the cities app?