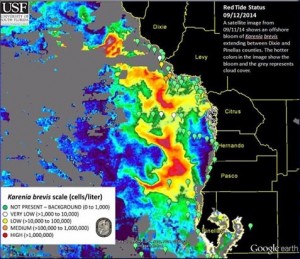 Florida’s own version of ‘The Blob’, consisting of vast fields of toxic algae, is now moving along the northeast Gulf of Mexico. It’s been slowly killing sea turtles, sharks and fish, and threatening the regions waters and beaches.

This phenomena is called the “red tide,” scientifically, it is a strain of algae called Karenia brevis usually comes Florida annually, but rarely ever even close to this size. It is currently about 60 miles wide and 100 miles long, about 5 to 15 miles off St. Petersburg in the south and stretching north to Florida’s Big Bend.

Local fishermen have been reporting large numbers of fish kills and vast stretches of reddish water.

Red tide can kill fish, sea mammals, and even birds by releasing a toxin that paralyzes their central nervous system. The algae also foul beaches and can be harmful to people who inhale the algae’s toxins when winds blow onshore or by large waves that launch the toxins into the air. 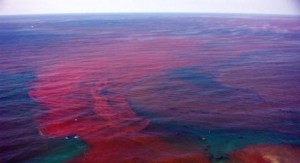 In 2005, a strong red tide killed reefs, made beaches stinky and caused millions in economic damage. A weaker red tide in 2013 killed 276 manatees, state records show, after infecting the grasses eaten by the endangered creatures.

Scientists still have no clue how to combat this increasingly problematic phenomena.  In the 1950s, scientists tried killing the red tide algae by dumping copper sulfate on it, which made the problem worse in some ways.

The most important step in prevention and mitigating loss is accurate red tide prediction and detection. Predicting when red tides are going to be worse than usual give tremendous help to fishermen and beach businesses in giving them sufficient time to prepare.

The red tides often start far offshore, where gathering data and images can be a time-consuming, expensive undertaking. The Florida Fish and Wildlife Commission has tried to stem this data gap by giving fishermen sampling jars to take out to sea with them.

Fishermen and coastal businesses say a better warning system could help save time and money.