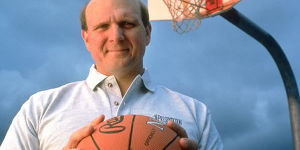 Steve Ballmer, the ex-CEO of Microsoft just won the bidding war for the NBA’s LA Clippers – his highest bid was $2 billion. When the deal finalizes, this will be the highest price ever paid for any NBA team…ever.

Ballmer outbid two other groups, one by David Geffen, a media mogul who offered a measly $1.6 billion (bidding in partnership with Oprah Winfrey and the CEO of Oracle, Larry Ellison). Another group of mostly un-famous Los Angeles investors also tried to get noticed, although all they could scrape together was $1.2 billion.

Shelly Sterling is the sole trustee of The Sterling Family Trust who currently owns the LA Clippers, she felt that the timing was right to find a new owner. Ballmer “will be a terrific owner,” Sterling commented in a recent interview, “We have worked for 33 years to build the Clippers into a premier NBA franchise. I am confident that Steve will take the team to new levels of success.”

“I love basketball. And I intend to do everything in my power to ensure that the Clippers continue to win — and win big — in Los Angeles,” Ballmer said. “LA is one of the world’s great cities — a city that embraces inclusiveness, in exactly the same way that the NBA and I embrace inclusiveness.” 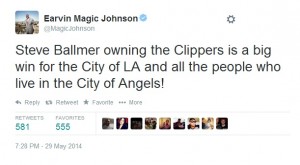 On Thursday, Magic Johnson lauded the deal on his Twitter account: “Steve Ballmer owning the Clippers is a big win for the City of LA and all the people who live in the City of Angels!”

Sterling negotiated the sale after her husband, Donald Sterling, made racist remarks that were made public. The remarks included Sterling telling girlfriend V. Stiviano not to bring blacks to Clippers games, specifically mentioning Hall of Famer Magic Johnson.

Shelly Sterling’s statement noted that she made the deal “under her authority as the sole trustee of The Sterling Family Trust, which owns the Clippers.” Donald Sterling’s attorneys contend that he is a co-owner and therefore must give his assent for the deal to go through.

In a letter obtained by The Associated Press on May 22, written by one of Sterling’s attorneys stated that “Donald T. Sterling authorizes Rochelle Sterling to negotiate with the National Basketball Association regarding all issues in connection with a sale of the Los Angeles Clippers team.” It includes the line “read and approved” and Donald Sterling’s signature. 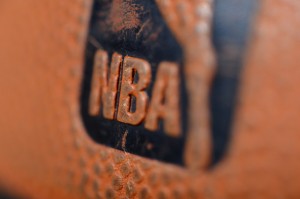 NBA franchise sale prices have been soaring in recent years, ever since the collective bargaining agreement was ratified in 2011. The Milwaukee Bucks were just sold to New York investment firm executives Marc Lasry and Wesley Edens for about $550 million, an NBA record.

In 2013, Vivek Ranadive’s group acquired a 65 percent controlling interest in the Sacramento Kings at a total franchise valuation of more than $534 million.

This isn’t Steve Ballmer’s first foray into potential NBA ownership. Ballmer and investor Chris Hansen headed a group that agreed to a deal to buy the Kings from the Maloof family in January 2013 with the intention of moving the team to Seattle, where the SuperSonics played until 2008.

The former Microsoft CEO helped Bill Gates transform the company from a startup with fewer than 40 employees and $12 million in annual revenue into the world’s most valuable business. The pair met in 1973 while living down the hall from each other in a Harvard dorm. 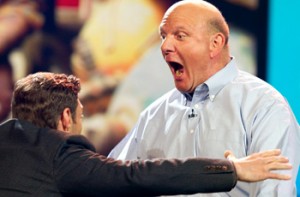 Throughout his years at Microsoft, Ballmer was known for his competitive drive and wild displays of emotion and hand-waving. Even at his farewell address to Microsoft employees, he high-fived and hugged audience members, pumped his fists in the air, and even shed tears as the popular 1987 song “(I’ve Had) The Time of My Life” played on the sound system. In a video of the event widely viewed on YouTube, he screams: “You work for the greatest company in the world!”

Ballmer, 58, who retired as Microsoft CEO in February, remains on the board and still owns about 4 percent of the Redmond, Washington-based software giant, worth $13.4 billion.

Now he will also own the most expensive NBA team in history.

Do you think this was a good decision?