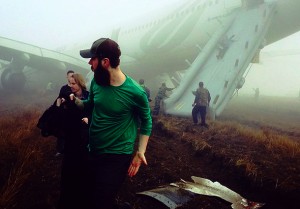 A plane just crashed in Nepal that was carrying 224 passengers. Miraculously, there were no injuries involved, and a shocking video has just surfaced showing the evacuation.

The plane’s primary landing gear snapped during a rushed landing, which caused the body of the aircraft to bounce off the runway, according to The Telegraph.

Perhaps the most shocking part of the crash was that no passengers were injured, even after the plane broke into several pieces.

A stunning video of the aftermath of the crash was captured by user Peter Lubeck, who describes himself on Instagram as a “Vagrant Swede.”