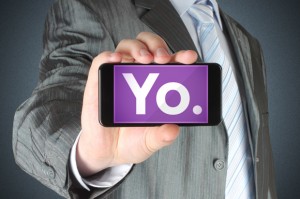 Facebook recently spent untold amounts of money to create what they believed would overtake Snapchat… they just released it this week and they were expecting their release of ‘Slingshot’ to be at the top of social media and app news. In an unexpected twist of fate, a much much simpler and low-tech app was released at the same time, and it is now what everyone is talking about.

The free app, simply called “Yo,” is available for both iPhone and Android users.

It was developed by San Francisco-based Life Before Us, LLC, the app’s creators describe it as “the simplest & most efficient communication tool in the world.”

It is really as simple as it sounds.

Download it, choose the friends you want to send your “Yo” greeting to, and they get a notification on their phone and that’s it.

The idea for the app emerged when Abel was asked by his boss at the time, Moshe Hogeg, head of the image-sharing app Mobli, to come up with a way to communicate with his assistant without calling or texting.

The idea then hit Abel while he was communicating with friends via WhatsApp. He noticed that “Yo” was a conversation between him and his friends — so why not make things simple and create an app based on that concept, which requires no typing at all?

Thus the “Yo” app was born — something Abel calls “context-based” messaging.

“It’s lightweight and you don’t have to read the notification. You can choose to ignore it and there’s nothing to open,” Abel said.

So far the app has raised a total of $1 million from angel funds and has more than 150,000 users since launching in April.