Did you know police aren’t the only ones who can enforce the law? Average citizens with no governmental authority can as well. Gavin Seim, a “constitutional activist” from Washington, just proved that point by pulling over a police officer and letting him off with a warning;

Gavin commented on his website that he spotted the police officer in an unmarked car, so he waved him down, first asking for the officer’s ID, then telling him it’s against the law to pull over the public using an unmarked vehicle. 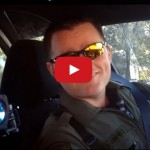 The officer at first seems surprised at what Seim has done, and even smiles. By the end, he’s ready to get out of there.

“That’s good to know,” the officer tells Seim after his explanation.

Gavin eventually lets the officer go with just a warning, telling him to “be safe out there.”

He also wanted the officer and everyone watching his video to know that this wasn’t a joke, as he comments on his website;

In Washington we have unmarked police vehicles impersonating citizens. If you think it’s not a serious issue, try asking those that have been raped or lost loves ones because of unmarked cars. It’s already illegal in WA for public vehicles to be unmarked, unless designated for “special undercover or confidential investigative purposes.”