Back when I was in school, teachers would always make students put their smart phones away, but these days, teachers are starting to embrace the new trend with much more open arms. This is most likely due to the younger generation of teachers who are now smartphone users themselves.

Here are the top 5 ways teachers are now using smartphones in the classroom;

#1 Homework Planning: A new app that is starting to become wildly popular among both students and teachers is called ‘myHomework Student Planner‘, while there are other homework planner apps on the market, myHomework integrates both in-class assignments and online teacher updates, along with syncing between a students smartphone and laptop seamlessly. Apps like this are making the process of doing homework much less cumbersome.

#2 In-class Backchanneling: A relatively new trend in the classroom is called ‘Backchanneling’, and it refers to the use of networks & social media to maintain a real-time conversation between all the students and the teacher. The two most popular apps are ‘Today’sMeet‘ and ‘Google Moderator‘, and some classrooms have even successfully used Twitter in discussions. 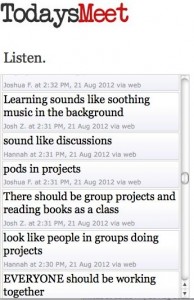 An example of how to use backchanneling would be for a keynote presentation, some students listening use their smartphones to comment to other audience members about things the speaker is saying, while the speaker is saying them, while other students can still write hand notes, or simply raise their hands. The presenter can respond to both types of interaction seamlessly.

Backchanneling  can be a great way to give quiet students a voice, to introduce additional facts and insights during a lesson, or simply to encourage “conversation” during lecture or group readings when you don’t want to actually interrupt the presentation.

#3 In-class Readings & Handouts: Tablets and phones can now become extremely powerful in the classroom when combined with books and handouts, especially now that Amazon has launched ‘Kindle Unlimited’, an unlimited ebook rental service for $10/month. Teachers are now also placing student handouts into Box folders. When reading or doing work in class, they can access unique Box spaces via the internet and open reference material without printing it up or asking for a new copy.

#4 In-depth research: One of the greatest active uses for smartphones is in the area of research. I remember the days when teachers used to make photocopies, took meticulous notes, and tried to employ a series of notecards in a vain attempt at some semblance of a coherent organized system. Smartphones do a much better job. In this case, the power is in the apps! 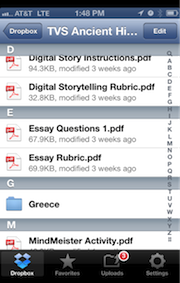 One of the best research tools on most smartphones are “camera scanners” (which capture information using the phone’s built-in camera). One of the best apps I have found is a program calledGenius Scan+  — available for iOS, Android, and Windows based phones. This app allows you to take pictures of documents (even books with those bendy pages), crop them, and then enhance them for ready viewing. You can create notebooks of documents (if you are copying sections of a book or article) and then store them on the device or export them (as a photo image or PDF) to Google Docs, DropBox, Evernote, and more. It’s a great tool for you or your students to organize research materials.

#5 Image-based learning: The most powerful feature of the Google Search is its ability to perform searches using images! This feature, called Google Goggles, is a creative way to search the internet for image based content.