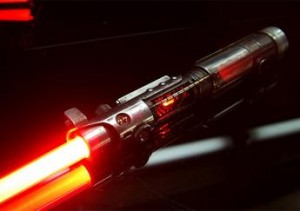 Scientists at the Harvard-MIT Center for Ultracold Atoms have just made a ground-breaking discovery that could possibly lead to the production of Lightsabers and Power Weapons. They have essentially discovered a way to “create” light molecules, that seems legitimate.

Until now, photons, or the mass-less particles that constitute light, were thought to not interact, but rather simply pass through each other, just two beams of luminescence during a laser-light show.

According to the Harvard Gazette, scientists have “improbably coaxed photons into hardened molecules” that you could, in fact, whack against each other in, say, a Bespin-based duel-to-the-death resulting in one person, sadly, losing a hand.

“It’s not an inapt analogy to compare this to lightsabers,” Harvard professor of physics Mikhail Lukin told the Gazette.

“When these photons interact with each other, they’re pushing against and deflecting each other. The physics of what’s happening in these molecules is similar to what we see in the movies.”

In an interview with WBZ-TV, MIT Professor, Vladan Vuletic noted, “It has long been a dream to have photons of light beams interact with one another. . .We use laser beams and shine them in from six sides and these laser beams actually cool the atoms.

“Maybe a characteristic of a lightsaber is that you have these two light beams and they don’t go through each other as you might expect; they just kind of bounce off each other.”

The comparison to a lightsaber was part of a Harvard University press release. I’m not against having a little fun, but the discovery here was finding a way to get two photons to bind to one another in very exotic circumstances. The press release says these bound pairs of photons “behave less like traditional lasers and more like something you might find in science fiction – the light saber.”

The only problem here is that this “binding” only works in a special medium, at this point, in order to use your new lightsaber on an adversary, you’d first have to lure him into a cloud of cooled rubidium atoms.