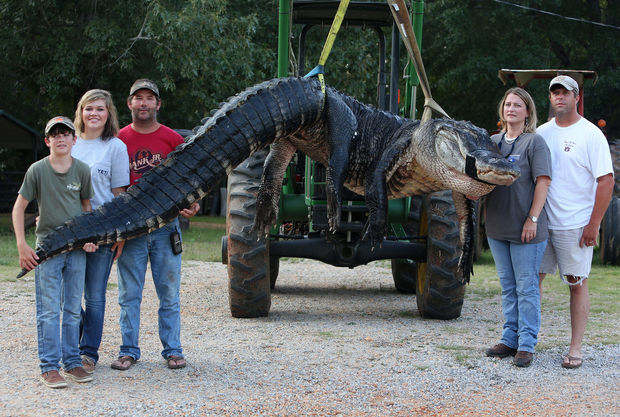 It was about 5am on Saturday morning, the sun was about to rise when Mandy Stokes saw it in all its magnificence. A 15+ foot prehistoric monster, weighing in at over 1,000 pounds, soon to be recorded as the largest gator in the world ever to be killed by a hunter.

The fight began at 10:30pm on Friday night when Kevin Jenkins got the first hook in the animal and the seasoned crew that was accompanying Mandy took action. They struggled, reeled, and followed the monstor for another

Mandy knew that, despite the monster’s size, a well-placed load of shot to the sweet spot behind the eyes spells a quick end to an alligator’s life. Finally, at 5am, Mandy pulled the trigger of her 12 gauge and water splashed over the whole crew. Anyone within a hundred miles of that spot probably heard the mixed screams of relief, joy and exhilaration that it was over.

“He came up just as calm as he could,” Mandy Stokes commented to AL News. “That’s the only thing on Swamp People that’s true. When I pulled the trigger this time, water just exploded on all of us.”

They enlisted more help to load the gator on a trailer, so it could be transported to the Roland Cooper State Park check station where WFF officials has been alerted they were going to arrive later than the normal 7 a.m. closing time.

It’s official weight was announced toward the very end of the live broadcast of the “Gettin’ Outdoors Radio with Big Daddy Lawler” show. Read the full story here on AL.com