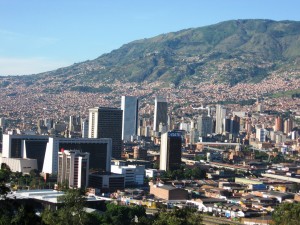 The city of Medellín, Colombia in the 1990s, was a haven for cartel bosses, one of the most prominent being Pablo Escobar. Less than 20 years ago, he ruled Medellín’s streets and controlled its politics with unquestionable power. He used his extremely profitable international cocaine trade, fuelled by demand in the United States, and many parts of Central and South America. Without any reliable public services for the city, Escobar won the hearts and minds of Medellín’s poorest with his generosity – even as he terrorised the city.

Today, things are a completely different story. One can hardly recognise where the slums used to be. In one of the poorest neighbourhoods of Santo Domingo, the city’s new Metrocable system, consisting of three lines of aerial gondolas, serves residents hundreds of vertical feet up a mountainside, ending their isolation from the city centre. The commute is now minutes, and the social and economic barriers between the informal settlements and the rest of the city are on their way to being broken down.

Last month, a remarkable gathering occurred in Medellin, Colombia. Some 22,000 people came together to attend the World Urban Forum and discuss the future of cities.

The focus of the gathering was on creating “cities for life”, a movement to promote equitable development in the urban environments in which a majority of the world’s citizens already live, and in which two-thirds will reside by the year 2050.

The location itself was symbolic: Once notorious for its drug gangs, Medellin now has a well-deserved reputation as one of the most innovative cities in the world. The tale of the city’s transformation holds important lessons for urban areas everywhere.

In the 1980s and 1990s, cartel bosses such as Pablo Escobar ruled Medellin’s streets and controlled its politics. The source of Escobar’s power was not just the hugely profitable international cocaine trade (fueled by demand in the United States), but also extreme inequality in Medellin and Colombia. On the steep Andean slopes of the valley that cradles the city, vast slums, virtually abandoned by the government, provided a ready supply of recruits for the cartels. In the absence of public services, Escobar won the hearts and minds of Medellin’s poorest with his largesse – even as he terrorized the city.

One can hardly recognize those slums today. In the poor neighborhood of Santo Domingo, the city’s new Metrocable system, consisting of three lines of aerial gondolas, serves residents hundreds of vertical feet up a mountainside, ending their isolation from the city center. The commute is now minutes, and the social and economic barriers between the informal settlements and the rest of the city are on their way to being broken down. 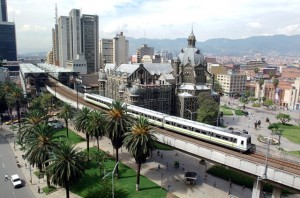 The problems of the city’s poor neighborhoods have not been erased, but the benefits that the infrastructure improvements have brought are brilliantly evident in the well-kept houses, murals, and football fields perched near the gondola stations. The cable cars are only the most iconic of the projects for which Medellin last year won Harvard University’s Veronica Rudge Green Prize in Urban Design, the most prestigious award in the field.

Beginning with the mayoralty of Sergio Fajardo (now the governor of Medellin’s department, Antioquia), who took office in 2004, the city has made major efforts to transform its slums, improve education, and promote development. (The current mayor, Anibal Gaviria, has affirmed his commitment to continuing on this path.)

Medellin constructed avant-garde public buildings in areas that were the most run down, provided house paint to citizens living in poor districts, and cleaned up and improved the streets – all in the belief that if you treat people with dignity, they will value their surroundings and take pride in their communities. And that faith has been more than borne out.

Throughout the world, cities are both the locus and the focus of society’s major debates, and for good reason. When individuals live in close quarters, they cannot escape major societal problems: growing inequality, environmental degradation, and inadequate public investment.

The forum reminded participants that livable cities require planning – a message at odds with attitudes in much of the world. But without planning and government investment in infrastructure, public transportation and parks, and the provision of clean water and sanitation, cities won’t be livable. And it is the poor who inevitably suffer most from the absence of these public goods.

Medellin holds lessons for America, too. Indeed, recent research shows how inadequate planning has fueled economic segregation in the U.S., and how poverty traps have formed in cities without public transportation, owing to a shortage of accessible jobs.

The conference went beyond this, emphasizing that “livable cities” are not enough. We need to create urban areas in which individuals can flourish and innovate. It is no accident that the Enlightenment – which led in turn to the fastest and largest increases in living standards in human history – unfolded in cities. New thinking is a natural consequence of high population density, provided the right conditions are met – conditions that include public spaces in which people can interact and culture can thrive, and a democratic ethos that welcomes and encourages public participation.

A key theme of the forum was the emerging consensus on the need for environmentally, socially and economically sustainable development. All of these aspects of sustainability are intertwined and complementary, and cities provide the context in which this is most clear.

One of the biggest obstacles to achieving sustainability is inequality. Our economies, our democracies and our societies pay a high price for the growing gap between the rich and poor. And perhaps the most invidious aspect of the widening income and wealth gap in so many countries is that it is deepening inequality of opportunity.

Some cities have shown that these widely observed patterns are not the result of immutable economic laws. Even in the advanced country with the most inequality – the United States – some cities, such as San Francisco and San Jose, are comparable to the best-performing economies in terms of equality of opportunity.

With political gridlock afflicting so many national governments worldwide, forward-thinking cities are a beacon of hope. A divided U.S. seems incapable of addressing its alarming increase in inequality. But in New York City, Mayor Bill de Blasio was elected on the promise of doing something about it.

While there are limits to what can be done at the local level – national taxation, for instance, is far more important than municipal taxes – cities can help ensure affordable housing. And they have a special responsibility to provide high-quality public education and public amenities for all, regardless of income.

Medellin and the World Urban Forum have shown that this is not just a pipe dream. Another world is possible; we need only the political will to pursue it.