Natalie Dubose, a single mother of two, recently used her entire life savings to build a small bakery in Ferguson, Missouri. This past week, during the rioting, Natalie’s Cakes & More was one of the many businesses that were attacked, her windows were smashed in, baking supplies destroyed, and the storefront was totally ruined.

In a recent interview by NBC News, she commented, “Everything that I invested, it came from me saving money through bake sales. Sometimes I couldn’t buy a pair of tennis shoes because I wanted to make sure I had enough money to buy a bucket of icing.”

That same day, a couple of strangers decided to create a GoFundMe page to raise $20,000 for her bakery. The campaign went viral and has now raised over 10 times the original goal, “If I could have arms big enough, I would just hug each and every last one of them,” she commented about those who have donated; 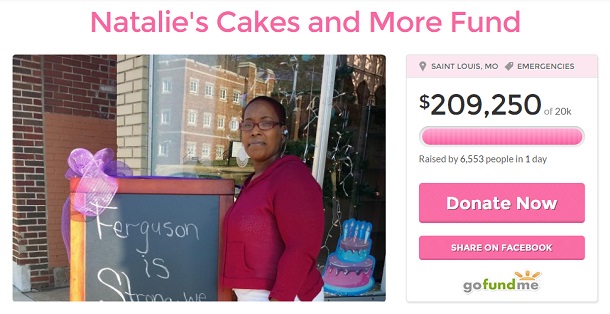 DuBose is incredibly thankful that she will be able to remain rebuilt, because the bakery is “like a baby.”

She is also now seeing orders for the holidays piling in. DuBose said she is now receiving over 50 orders a day for Thanksgiving and now has more customers than she ever could have imagined;