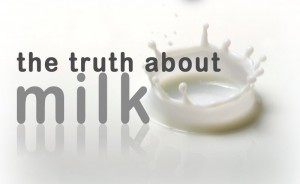 In a recent Consumer Reports survey, 51 percent of Americans said they are limiting their consumption of fat. It’s not clear what type of fat was being limited, but chances are this lumps ALL fats into one evil category, when in reality the only types of fats you should really be limiting are man-made varieties like trans fats and rancid, refined polyunsaturated fats in vegetable oils.

Unfortunately, fats in general are considered the dietary villains by many people, even though natural fats, like the kind found in full-fat organic dairy, are very good for you (unlike non-organic, low fat dairy substitutes).

[sociallocker] fat found naturally in cow’s milk, significantly lowers the risk of cancer. In one study, those who ate at least four servings of high-fat dairy foods each day had a 41 percent lower risk of bowel cancer than those who ate less than one. Each increment of two servings of dairy products equaled a 13 percent reduction in a woman’s colon cancer risk.

If you’re a milk drinker, switching your milk from conventional low-fat to organic full-fat may significantly improve your health, as new research showed that organic milk contained 25% less omega-6 fats and 62% more omega-3 fats than conventional milk. Improving your Omega-6 to Omega-3 fatty acid ratio has been show to drastically increase cardiovascular and digestive health. Over a 12-month period, those who drank conventional milk had a 2.5-fold higher omega-6 to omega-3 ratio than those who drank organic milk.

Perhaps most striking of all, the study found that people who made the following three dietary changes could decrease their omega-6 to omega-3 ratio by about 80 percent of the total decrease needed to reach a target ratio of 2:3.

It should come as no surprise that whole milk is healthier than low fat or fat free versions since these are not truly whole foods. The important vitamins found in milk, like A and D, are fat-soluble and therefore require fat to be absorbed and utilized by the body. And since omega-3s are indeed fatty acids, it’s not shocking to learn that whole fat versions of milk have more of them. According to study, the whole organic milk contained 50 percent more omega-3 fatty acids than two percent milk and 66 percent more than one percent milk.