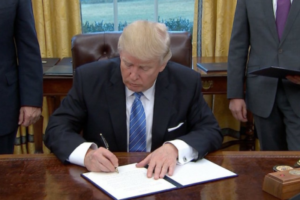 Donald Trump just signed a new resolution (H. Res. 12), which essentially removes all Islamic symbols and rituals from government buildings, including in the White House.

Over the past 8 years, President Obama gradually introduced symbols and rituals into the White House and other governmental buildings in Washington in order to appease Muslims working at or visiting the Capitol. Crescent moons were placed in strategic positions (occasionally replacing the Christian symbol of the cross), and silence wasn ordered during the 5 times of Islamic prayer each day. In addition, prayer rugs and crescent moon symbols were made available in several inconspicuous areas around Capitol buildings to make Muslims more comfortable.

The Obama administration has defended the changes by asserting that it also observes several other religious moments of silence and prayer out of respect, including several minutes of Christian prayer on Sunday mornings, in addition to chaplain blessings of staff breakfasts.

President-elect Trump, who acknowledges that this country was founded by Christians and was built on Christian morals, is now ordering all non-Christian religious symbols to be removed from government buildings in Washington. having all pagan symbols removed from the property unless they offer some historical significance.

Jim Mergernerlerny, head of the team that will transform the White House from the Obama’s home to the Trumps’ second home, told MSNBC: “Mr Trump doesn’t see the need to provide prayer rugs and false idols in a house built by Christians. Washington, DC offers a diverse cultural centre for the worship of any kind. You won’t find any special considerations for Judaism or crucifixes to appease Catholics, either. There is a simple chapel with a single cross on one wall that is suitable for prayer by anyone. Our government doesn’t need to be forcing prayer rituals down people’s throats just so we don’t “offend” apologising people looking to blow us up.”

What type of religious symbols do you think should be allowed in government buildings (if any)?