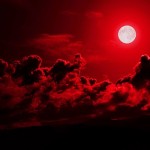 A historic series of eclipses is about to begin, all of which will be visible from the United States for the first time in over 400 years. The first total lunar eclipse of 2014 occurs in the overnight hours tonight and will be visible across most of North America, South America, Hawaii and parts of Alaska. Depending on your location, it begins either late tonight or in the early hours of Tuesday morning. In an interesting twist of fate, the first blood moon will take place on tax day. (April 15th, 2014) 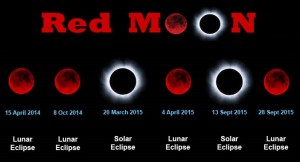 On East Coast of the United States, a cold front that stretches from western New York State to the central Gulf of Mexico will bring a decent amount of cloudiness to the east coast. Generally, anywhere east of a line extending from Sault Ste-Marie, Mich. to Paducah, Ky. to Baton Rouge, La. won’t have the greatest visibility of the blood-red moon during the predawn hours of Tuesday, but for most people, it will still be worth staying up to watch.

The upcoming series of blood moons and solar eclipses will be spectacularly beautiful astronomical events over the next two years.

The tetrad — or four consecutive and complete lunar eclipses occurring at approximately six-month intervals — will all be visible over the United States this year and next, according to NASA lunar eclipse expert Fred Espenak. 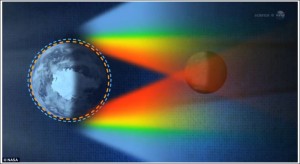 NASA’s Espenak does not consider tetrads as particularly rare, noting in a statement that there are nine sets of tetrads during the 21st century. He notes that there have been periods with no tetrads, notably from 1600 to 1900.