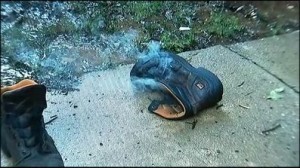 Sean O’Connor from Atlanta was just blown out of his shoes on Saturday by lightning and miraculously lived to tell the story.

O’Connor, who recently turned 30, was casually raking his yard on Saturday morning when he heard a loud sudden crack. “It sounded like a tree falling over, it threw me across the driveway and knocked me out of my shoes.”

Disoriented, O’Connor initially assumed he had gotten hit by a tree, until seeing his smoking shoe. “When I noticed my shoes were on the other side of the driveway and I heard the thunder, I realized it was lightning that had just hit me.”

After collecting himself, O’Connor called his wife to tell her what had happened, sending her a cellphone video of the scene when she initially thought he was exaggerating. O’Connor’s wife then urged him to go to the hospital, where he was held for 24 hours because of an irregular heartbeat.

O’Connor was released on Sunday, emerging from the potentially fatal incident with lower back pain, a few scrapes from when he was thrown and no indications of permanent damage.

“I look like my normal self, it’s hard for people to believe I was struck by lightning.”