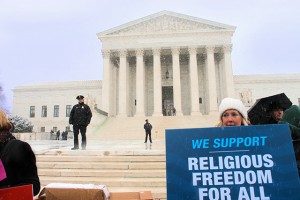 In one of the most unprecedented supreme court cases in recent years, Hobby Lobby has just won a major victory for religious freedoms for corporations. The US Supreme Court has just ruled that “closely held” for-profit businesses can use religious freedom objections to opt out of the requirements within the Affordable Care Act that require free ‘morning-after’ and ‘week-after’ pill coverage for their employees (as many believe that these are forms of abortion).

The final decision came down to a 5-4 ruling, in favor of the Hobby Lobby case. This marks the first time in history that the court has ruled a for-profit businesses can cite religious freedom to avoid a federally mandated requirement. It’s also a significant blow to a provision of the Affordable Care Act, and may lead to more future cases against the recent healthcare legislation.

Supreme Court Justice Samuel Alito wrote most of the opinion for the Affordable Care Act case, finding the contraceptive mandate in its current form “unlawful”, but the four liberal justices on the court dissented.

The final ruling stressed that it only applies to corporations that are under the control of just a few people in which there is no essential difference between the business and its owners (“closely-held”).

Justice Alito stated that in the case before the court, the religious objections were legally accurate, under a law that stops the government from taking action that “substantially burdens” religious freedom. He noted the fact that for just one company, fines could add up to over $475 million per year if they did not comply with the every part of the Affordable Care Act.

“If these consequences do not amount to a substantial burden, it is hard to see what would,” Alito remarked.

This Supreme Court case was the first major challenge to the Affordable Care Act since the court upheld the law’s individual requirement to buy health insurance two years ago.

Many more companies, in addition to Hobby Lobby, have claimed religious objections to covering some or all contraceptives. The methods and devices at issue before the Supreme Court were those the plaintiffs say can work after conception. The emergency contraceptives Plan B and ella, as well as intrauterine devices, which cost up to $1,000.

The Obama administration will now have to deal with how it will accommodate businesses that claim religious objections while also maintaining contraceptive coverage for female workers.