Dan Thorn of WVNS in Bluefield, West Virginia has just become a national celebrity for his epic commerical break dance moves. The recent videos he uploaded to youtube have now attracted millions of views in a few short days.

Here’s the clip that made him famous, now with over 4 million views; 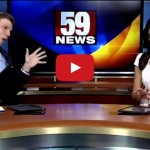 “It’s weird, to be honest with you. I often have to pinch myself and say how did this happen,” Thorn commented.

Thorn is a New York native who joined the West Virginia news team in February 2013, according to the channel’s website, but clearly his co-anchor Sarah Pisciuneri hasn’t warmed up to him yet.