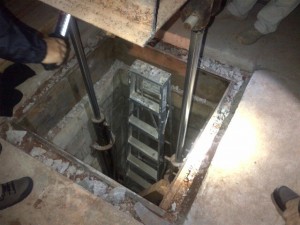 According to a press release by U.S. Customs, federal agents received a tip that led them to a box truck containing over 4,700 pounds of marijuana. Using the drivers testimony and other evidence, they soon uncovered one of the most advanced drug smuggling tunnels in the history of the US-Mexico drug wars.

Border Patrol Investigators discovered a cement shaft in Southern California that is equipped with a massive hydraulic lift. The corridor to the tunnel on the U.S. side is large enough for an adult to stand upright secured on all sides with wood and steel.

The investigators weren’t sure about the integrity of the air inside the tunnel, so they weren’t able to find the other end in Mexico, but Mexican authorities are now working to find out where the entrance to the tunnel is located.

Over the past few years, U.S. authorities have been finding an increasing amount of tunnels, to date, they have found and dismantled over 80 cross-border smuggling tunnels. Some of the biggest were found in Nogales, Arizona, San Diego California, and El Paso, Texas. In addition to smuggling drugs, the tunnels are also often used for human trafficking.

Please share to help build awareness of this growing issue;