For over 160 years elevators have been dependent on cables, allowing for only limited riders, limited speed, and an up/down motion. A leading elevator manufacturer, ThyssenKrupp, has just re-invented the wheel and developed the world’s first rope-free elevator system that enables buildings to be built much higher and wider than before;

Their new system is called the ‘MULTI’ expands on ThyssenKrupp’s TWIN system (the first elevator that allowed for two cabins per shaft). MULTI integrates many of TWIN’s control system and safety features, while also including new and lightweight materials for cabins and doors as well as the new linear drive – using one motor for horizontal and vertical movements. 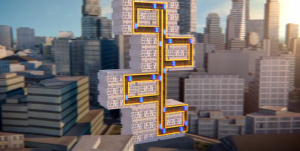 The advancements of ThyssenKrupp’s MULTI elevating system will truly allow for a new era of skyscraper design, as elevator wait times will decrease to just 15-30 seconds, adding rentable space by decreasing the elevator footprint by up to 50%, and conserving energy use within buildings. That’s crazy to think about if you work in an office building in New York, as it’s estimated you’ll spend almost 16 years waiting for an elevator and about six years inside one during your lifetime, given current technology.

ThyssenKrupp’s magnetic levitation elevators that can move at both hyper speeds and side-to-side will truly revolutionize the industry;

What do you think the new unrestricted skyscrapers of the future will look like?