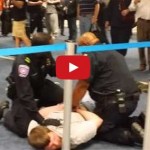 A video of a fight at Dallas-Fort Worth International Airport shows a man taunting another man in one of the airport’s terminals, apparently over his pink shirt.

Another passenger asks the instigator what he’s upset about, to which he responds, “Queers is what I’m upset about,” just before attacking the man in the pink shirt. At that point, he’s immediately subdued by several bystanders and airport security.

We have just discovered some more back-story as to why he initially became upset, and it may shock you;

After careful annalysis of the audio on the video, the attacker seemed to be initially upset about the “photographer, taking pictures of me…”

Perhaps the combination of people taking his picture, pink shirts, homophobia, and men in cowboy hats was just too much for this young (perhaps drunk) Texan to take.

After he was on the ground being restrained by police, one passenger asked the man why he attacked the stranger. “You want me to tell you the reason I did it?” he responds. “Because this is America, that’s why. The same reason you get to live, to breathe, to walk black.”

Neal Kennedy, brother of the original video’s uploader, Andrew Kennedy, said that, “We hope that [the instigator] was under the influence of some kind of substance, because if he wasn’t and that’s his true personality, then he’s going to have a long road in front of him.”