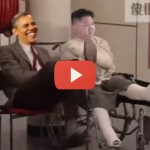 The communist nation of North Korea has asked China to stop the spread of a new viral video featuring US president Barack Obama dancing with and fighting against their leader Kim Jong-Un. North Korea feels the clip, “seriously compromises Kim’s dignity and authority.”

Beijing has been unable to oblige.

In the video, Kim’s face is superimposed onto a series of some of the most viral dance and fighting videos of all time, even using clips from the action film ‘Kung Fu Hustle’.

Once of the clips features Kim pirouetting in a dance studio, then being hit with a kick delivered by President Obama. Other world leaders also make appearances, including Russian President Vladimir Putin and Japan’s Prime Minister Shinzo Abe.

Please DO NOT share this video using one of these buttons;