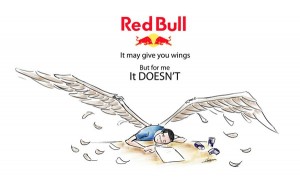 A story about a Red Bull advertising settlement went viral today. The story claims that if you purchased a Red Bull in the last 10 years you will get money back. The only problem is the number don’t add up.

The Red Bull company has indeed agreed to pay out $13 million after settling a US class action lawsuit, according to the drinks industry publication BevNet. The suit specifically address Red Bull’s marketing campaigns that say the drink can improve concentration and reaction speeds, but the plaintiff in the case said these claims were false and lacked scientific support. While the suit did not allege that plaintiffs were disappointed that they didn’t suddenly sprout wings, it does say that Red Bull relies a lot on terms like “wings” and “boost” to give consumers the impression that the drink gives people some sort of physical lift or enhancement.

If the proposed settlement is passed by the US District Court of the Southern District of New York, where the case was brought, Red Bull will be required to give certain customers a check for $10 or a voucher for $15 worth of Red Bull products.

While the $13 million settlement is indeed true, the viral news stories are claiming the settlement will cover everyone who bought at least one can of Red Bull since 2002.

The Numbers Don’t Add Up

The problem is that Red Bull sells over 4.5 Billion cans annually. If we were extremely generous and assumed the average consumer purchases 50 cans per year, that would mean that at least 90 million people purchase a Red Bull each year. Even if Red Bull only gave $10 checks to the people that purchased a Red Bull in 2013 (forget everyone since 2002), they would need to pay out $900 million.

The $13 million dollar settlement won’t even cover a fraction of the claims.

You can register online or download their form and mail it in – if you’re one of the first million people to do so, you might get $10 or $15 worth of Red Bull products.

This Weekend’s Historic Blood Moon Could Mean The End Of The...