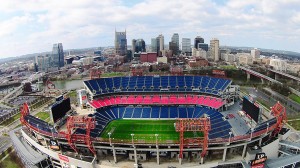 The Tennessee Titans’ owners and city leaders just made a major announcement that LP Field will now be known as ‘Nissan Stadium’. The new 20-year naming rights contract will go into effect this week, changing the decade old ‘LP Field’ name.

The decision marks a definitive partnership between two of the most powerful brands of Nashville. “This partnership sends a strong message about how positive the outlook is for the future of the city of Nashville, Nissan’s operations in Middle Tennessee and the Tennessee Titans franchise.” Titan’s owner Kenneth Adams commented in a press release this past week.

The new Nissan signs will be erected and installed onto the stadium over the next several weeks to be ready for the upcoming 2015 season.

Nissan is currently on of the largest employers in the Nashville region. The company has invested over $6 billion in the area, and now employs over 11,500 workers in the North American headquarters in Franklin TN.

You can now browse all job openings around Nashville here.

Forex CRM: Get the Most Out of Your Tools