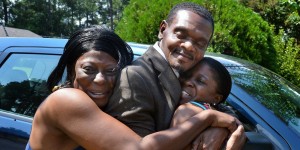 Two men have shown more forgiveness than most of us could ever imagine. Henry McCollum and Leon Brown were just released from prison this week after being convicted of the rape and murder of a North Carolina child some 30 years ago. Conclusive DNA evidence has just found, conclusively, that they are innocent.

McCollum (now 50 years old) was 19 at the time of the arrest. He was sentenced to death in 1984 (so far, North Carolina’s longest-serving death row inmate), and his half-brother McCollum was sentenced to life in prison.

“Ain’t no anger in my heart. I forgive those people,” McCollum told reporters at WRAL.

“I don’t like what they done to me and my brother because they took 30 years away from me for no reason, but I don’t hate them,” he commented.

McCollum was released from Central Prison, in Raleigh, and Brown walked out of Maury Correctional Institution in Greene County, North Carolina.

The siblings were only teens when they were arrested in 1983 and charged with the rape and murder of 11-year-old Sabrina Buie in Red Springs, about 30 miles southeast of Fayetteville.

Buie’s body was found in an area of Red Springs known as something of a “lovers’ lane,” the ground was littered with “beer cans, condoms and cigarettes, and it ended up being one of those cigarette butts that ultimately freed the men.

DNA found on a cigarette “matched another individual named Roscoe Artis, a convicted rapist and murderer who lived less than 100 yards from where the victim’s body was found,” said a statement from McCollum’s and Brown’s attorneys.

Artis is already serving a life sentence in a North Carolina prison on a separate conviction.