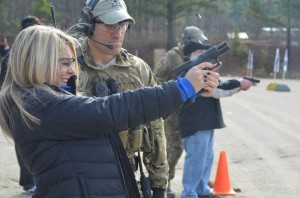 Washington DC’s handgun ban has just been struck down by U.S. District Judge Frederick J. Scullin, who ruled that the Second Amendment gives people the right to carry a gun outside the home for self-defense, and that includes residents of the DC area.

The recent lawsuit challenged Washington’s ban on carrying handguns outside of homes was filed in 2009, shortly after the city rewrote its gun laws following a landmark 2008 U.S. Supreme Court case that struck down Washington’s 32-year-old ban on handguns.

The laws that allow residents to keep handguns in their homes require them to be registered, as well as requiring owners to take a safety class, and be photographed and fingerprinted, as well as re-registering their handgun every 3 years.

“There is no longer any basis on which this court can conclude that the District of Columbia’s total ban on the public carrying of ready-to-use handguns outside the home is constitutional under any level of scrutiny,” remarked Scullin.

The District of Columbia is currently considering an appeal of the judge’s ruling, and they are currently asking the judge to stop his ruling from going into effect during any appeal. – details from CBS News

What are your thoughts about handguns in public?