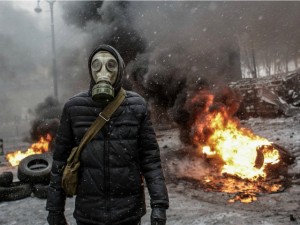 Since the personally (one of the requirements was to release political opponent Yulia Tymoshenko) and professionally motivated decision to turn down a deal with the E.U. by former president Viktor Yanukovych the people of Ukraine have taken to the street. Through persistent and fearless protesting the Ukrainian people have made their opinion clear: They are done.

The pictures taken of the more violent moments of ongoing protesting have captured the world’s attention. The questions now as to how this will escalate. The protesters successful in their taking of the city for now could lead to severe backlash with Russia’s help. The question being what will happen in retaliation to Russia’s advances.

The point we haven’t discussed is what the Ukrainians have accomplished that no protest in the Western world. The student riots in London, the proceeding NHS protests, Occupy, they were all almost fads that faded with police aggression.

In a world that consistently demands change, it’s quite a response to see when real change is enacted. For better or worse the Ukrainians are ready to risk their lives for the chance of a better life. Those watching are uncomfortable at the statement this makes, how terrible life must be before true change via protest will be enacted.

This leaves us with our own complaints stuck in our throats. We talk the talk without walking the walk. The Ukraine is a reminder of what change often looks like. With all eyes on Ukraine the world is watching change happen in a way it often doesn’t.

Meanwhile Venezuela and Thailand fight for their own demands to be met and no one seems to be paying attention. Perhaps its old Cold War fears rising, forcing the eyes of America onto Ukraine. But if our concern for people’s well-being were the interest we would have three countries vying for attention. Just as before it isn’t our interest in the country’s well-being but its relationship with Russia, and Russia’s reaction to it that bothers us.

These protests have been going on for months, which is also true for Venezuela and Thailand. However it is Ukraine that holds our attention. With little in the news about the protests themselves, it seems that the success of the protesters has caught the attention of an old adversary. Thailand and Venezuela’s protests are ending with violence, jailing, and little success in throwing out the existing regime.

It seems this is the truly key point. Have enough citizens die at the hands of the police sworn to protect them, force a regime that should never have been there in the first place out, and then the world will pay attention.

However this attention may not be the kind the protesters are looking for. Regime shifts means a shift in world politics, and that means someone might lose money and power (though at this point we may as well coin a new term that means both because these two things are so intertwined it is expected that to have one, a person must have the other). Thus the world takes interest, for their own sake, and not for the sake of the people so long repressed.

When the IMF can come in and offer a country the financial aid it needs while trapping it in a contract that will ultimately hurt it. Something Russia and the Ukraine has experienced a few decades before this. Protesting and how far it is taken is a sign of the people’s desperation and resolve. The downside is that in a globalized world the international companies and countries of interest are seasoned at taking advantage of a country in transition.