Normally when we think of presidents driving down the road, we think of motorcades and armed guards, however, one world leader just wants to be friendly.

Uruguayan President Jose Mujica and his wife, Sen. Lucia Topolansky were driving home one day from running the nation, when they spotted Gerhald Acosta on the side of the road. He was trying to get a ride home from working at the paper mill plant in southwestern Uruguay.

After numerous cars passed him, a large SUV suddenly pulled over. Once inside, Acosta realized that Uruguayan President Jose Mujica and his wife, Sen. Lucia Topolansky, were in also the vehicle.

“I know this woman. It was Lucia, with Manuela the dog, and Pepe (Jose) in the front seat. I couldn’t believe it. The president was giving me a ride.” Acosta told El Observador. 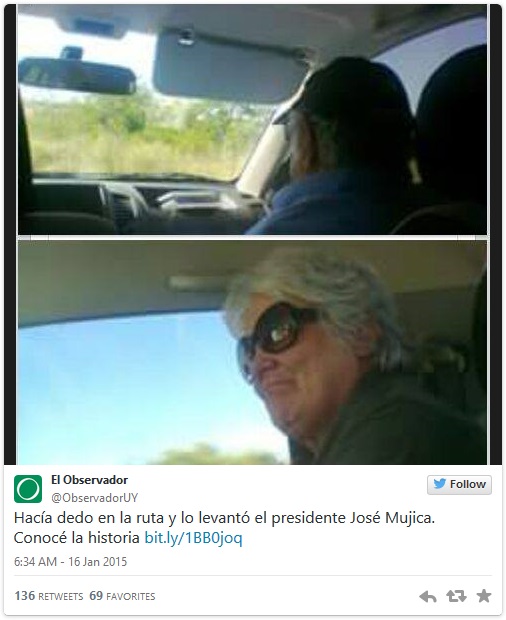 While Uruguayan President Mujica’s decision to pick up a hitchhiker does sound a little crazy, the leader has been known for his acts of compassion. During a television interview in Montevideo last November, he even stopped the interview to give money to a man in need.

Over the years, he has given so much away, that many now call him “the world’s poorest president,” thanks to his decision to donate 90% of his salary to charity.