The following shirt was just listed for sale by ZARA.com (it has since been taken down off the site) – it featured horizontal stripes, rather than the vertical ones found on the garb the Nazis imposed on Jewish people during the Holocaust. 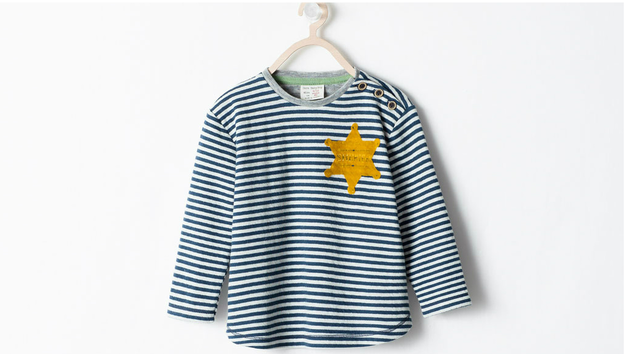 Recent Report by Times of Israel:

From the Depths, a nonprofit that works to preserve unmarked graves and repurposed gravestones of Jews killed in Poland, posted a condemnation of the chain on Twitter and sent the company a strongly worded letter and subsequently spoke to the management by phone.

In the phone conversation, From the Depths head Jonny Daniels was promised that sale of the shirt would end immediately.

The company has now also apologised on Twitter, and the garment is no longer viewable online – they commented;

@eylanezekiel We honestly apologize, it was inspired by the sheriff’s stars from the Classic Western films and is no longer in our stores

But now there’s even more controversy over the use of language in the apology from Zara’s Israeli office.

They commented that the shirt would be “exterminated”, according to 972mag, “used the exact [Hebrew] word to describe the Nazi genocidal practices.”

The Jewish Press reports that the company has faced similar accusations in the past:

Previously in the month of September 2007, the fashion chain took down an extensive line of handbags from its stores in Britain after it was pointed out the design featured Nazi swastikas. The bag had been produced in Asia, however, where the symbol also carries ancient cultural significance. – check out all clothes offered by Zara on Amazon.com