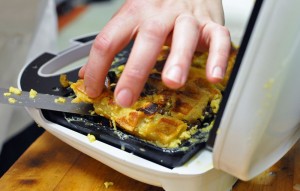 This may be one of the craziest stories you’ll ever hear.

This past Monday at an America’s Best Value Inn near St. Louis, a massive brawl broke out over a the use of a waffle maker.

According to County Sheriff Kim Cole, here’s went down;

“Apparently there was a line at the waffle maker, and a couple of people felt an individual had cut in line, and that sparked a verbal argument. One lady walked up to another lady and asked if she was in line for the waffle maker thing and the lady never answered her. So the first lady went and made a waffle, and when she went to go and take it this other gal tried to take it from her and that started the fight over the waffle.”

The craziness came to a climax as hungry guests ran in to defend their waffles like it was the last waffle iron on earth. Soon 30 people were in a full blown riot at the hotel breakfast bar.

That’s when the police were called — a lot of police.

As Cole tells it, “two-thirds of [her] road patrol [were] tied up on this fiasco,” which, no question, is too many for something so closely resembling a scene from a cartoon.

Once again, most of the police force were called after a 30-person fight broke out over 1 waffle maker.

Watch The Best Live News Bloopers All In One Video