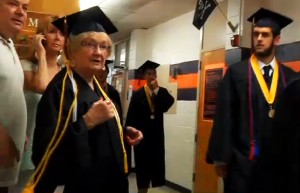 It has now been over 65 years since Peggy Tate Reeves started her high school journey. This past week, she finally had the privilege to walk across the field at South Pittsburg High School and receive her high school diploma.

During her junior year of high school, she had her appendix taken out and had to sit out of school for several weeks. She then enrolled in summer school to attempt to catch up, but they simply didn’t offer enough credits.

When her senior year came, she was able to land a fairly good that didn’t ask for a diploma. At the time, she was only 1/2 credit short from being able to graduate;

Peggy is now officially the oldest person to ever graduate from South Pittsburg High School.