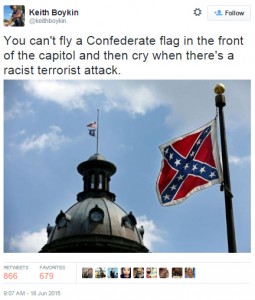 SC Governor Haley has been fairly silent about the confederate flag that has been flying on the State Capitol grounds, even after national media has been largely focused on it. Politicians, celebrities, reporters, and the general public all have been calling for it’s removal after last Wednesday’s shooting death of nine black members of the Emanuel African Methodist Episcopal Church in Charleston.

Many people feel that the act of removing the flag will bring even greater racial unity to the state.

“We are not going to allow this symbol to divide us any longer. The fact that people are choosing to use it a sign of hate is something that we cannot stand. The fact that it causes pain to so many is enough to move it from the capital grounds. It is after all a capitol that belongs to all of us.” the governor remarked in a recent press conference.

The Confederate flag has been flying in front of the state capitol for 15 years after it was removed from atop the statehouse dome.