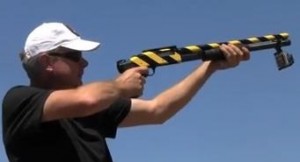 Lately we have seen a huge increase in drones taking videos of everything from fireworks, to volcanoes, to rocket launches. Now we are starting to see a new fad called ‘battle-drones’, innovators are now creating tougher and tougher drones that can withstand almost anything.

In the following video, Marque Cornblatt, a battle drone maker, puts his new prototype through a torture test. The airframe will face flying through fire and glass windows, free-fall drops from hundreds of feet and will even face down a 12 gauge shotgun loaded with heavy dove ammo. Does this drone airfrmae have what it takes to survive?