During last night’s game, the Charlotte Knights (9-6) officially became the best sports team in our city. The team traveled to Norfolk to beat the Norfolk Tides (9-7) by a score of 4-1.

Former first-round Philadelphia Phillies pitcher Kyle Drabek joined the Knights on Thursday and helped them beat the Tides and secure the #1 spot in the International League South Division. 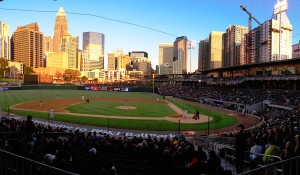 The team is not only not at the top of their division, they are also now one of the most watched team in the minor leagues. In 2014, the Knights moved uptown from suburban York County and broke a minor-league season record with an attendance of 687,715 fans over 71 home games, an average of 9,700 per game. This is even more remarkable when you consider that the Knights previously finished at or near the bottom for ticket sales in the 14-team International League.

Next week, on April 30th, the Charlotte Knights will welcome professional wrestling legend and North Carolina native Shane “Hurricane” Helms. Prizes will be awarded for the best costumes via the team’s official Twitter page by using hashtag #SuperheroKnight.

For more information or to purchase tickets click here.