Brian Conti is a native to the Charlotte region who still has a day job as a design engineer, despite his numerous inventions and product launches. That may soon change when his most recent product hits the assembly line, a product that has now been featured by Huffington Post and ABC News.

Conti’s new invention is the bottleLoft, which he calls, “the world’s first magnetic bottle hanger for your refrigerator.”

The device is a plastic strip with three strong round magnets attached to lift and store metal-capped bottles in the air, freeing up shelf space in the fridge. An adhesive back makes it easy to install. 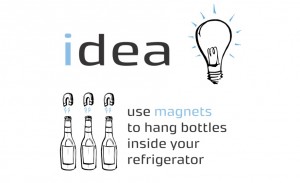 BottleLoft will be ready for shipping to early backers next month thanks to the wildly successful Kickstarter campaign, raising over $60,000 in just two weeks, with a goal of only $20,000.

Through Kickstarter, an online fundraising tool, bottleLoft attracted 1,300 backers who ordered 3,300 units. Next month he will start shipping them out.

He already has a patent pending on the bottleLoft, and has received a number of calls from retailers who are interested in distributing the product across the country. He’s even received an invitation to next year’s Chicago Home and Housewares Show where lots of the big names in the home gadgets and gizmos industry come to order large quantities new and exciting gizmos and tools for the home.