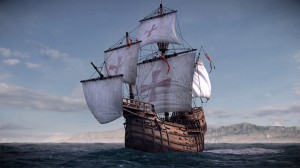 Divers have just discovered a shipwreck off the coast of Haiti that they claim to be Christopher Columbus’ Santa Maria, one of the three ships that first reached the Americas in Columbus’ 1492 expedition.

The underwater treasure hunter Barry Clifford, who led the team of underwater explorers, says he’s confident it is the real thing.

If this stunning discovery is confirmed and authenticated, it would go down as one of the most significant archaeological discoveries in history.

The remains of a ship were discovered in the exact area where Columbus said the Santa Maria ran aground over 500 years ago, Clifford said. The wreck is stuck on a reef off Haiti’s northern coast, 10 to 15 feet beneath the water’s surface. 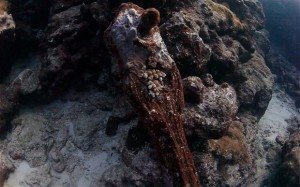 The factor that solidified Clifford’s belief the ship is the Santa Maria is a cannon of 15th century design that was found at the site, he said.

Clifford calls the Santa Maria a ship that “changed the course of human history.”

He named it La Navidad, which means ‘Christmas’, and then returned to Spain on the Nina, leaving behind 39 crew members unable to fit on the ship.

The third ship, the Pinta, was separated from the other two at the time.

One year later, Columbus returned with 17 ships and some 1,200 men, but the settlement had been burned and no one remained. (This Smithsonian article has more on La Navidad.)

The 2003 discovery of the possible ruins of La Navidad led Clifford to the current location off the coast, where he re-examined the wreck that had been found by his team. He says the size and location in relation to the ruined fort match what he’d expect from the Santa Maria.

“I am confident that a full excavation of the wreck will yield the first ever detailed marine archaeological evidence of Columbus’ discovery of America,” Barry Clifford was quoted as saying.