WARNING: Don’t watch this if you’re scared of heights

Viral YouTube sensation and professional stunt rider Danny MacAskill just created a new heart stopping video — biking and flipping across the Cuillin Ridge on Scotland’s Isle of Skye. The 28-year-old’s unbelievable skills have made him a YouTube celebrity…here’s why…

#TheRidge is the brand new film from Danny Macaskill… For the first time in one of his films Danny climbs aboard a mountain bike and returns to his native home of the Isle of Skye in Scotland to take on a death-defying ride along the notorious Cuillin Ridgeline.

Ridiculous Time Lapse Video Of Portland Will Make You Fall In... 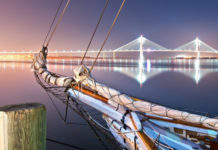 Charleston Was Just Ranked As The Friendliest City in The World