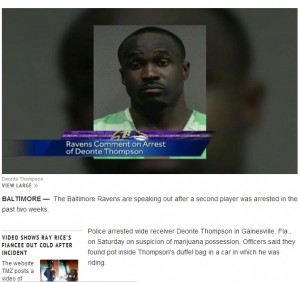 Ravens Wide Receiver Deonte Thompson was not arrested after climbing on SUV naked. Here is the actual picture of when he was arrested back on February 24th for possession of Marijuana charges. EmpireSports.co took this image to the right and edited it, adding in a random naked black man that could almost resemble Deonte.  The claim that “Thompson was arrested after climbing on top of a an SUV, removing all of his clothing then taunting police officers as they tried to talk him down. Police believe he was likely high on PCP at the time.” is NOT TRUE 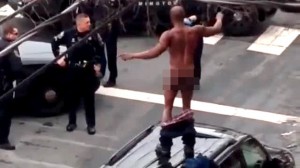 The true arrest from February 25th stated, “Police arrested wide receiver Deonte Thompson in Gainesville, Fla., on Saturday on suspicion of marijuana possession. Officers said they found pot inside Thompson’s duffel bag in a car in which he was riding.”

The naked black man picture came from Delaware, it was a man arrested on suspicion of drug use (NOT DEONTE THOMPSON) after he climbed on top of an SUV, stripped naked and taunted police. Police told reporters that they believed Darren Staats, 28, was high on the drug PCP, also known as “wet,” when he scaled the occupied truck at 4th and Monroe Streets in Wilmington, Del. at 4:15 p.m. on Monday.