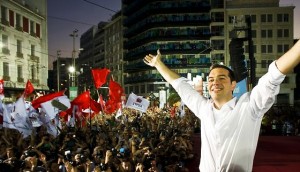 The Greek election campaigning and debates have certainly been heated, and the super rich of the country have been pouring money into conservative party campaigns to keep their kick-backs coming in, but it seems, they couldn’t out-bribe the citizens of Greece.

The nation has just elected the first anti-austerity party in the Eurozone.

Election officials have now counted over 18% of the vote, and the Syriza party has taken 35.03% of the vote, which government officials are considering enough to call the election. Greece how has a new ruling party!

“What’s clear is we have a historic victory that sends a message that does not only concern the Greek people, but all European peoples,” Syriza party spokesperson Panos Skourletis remarked on Greek television.

Over a quarter of Greeks are unemployed. Four years of austerity, which came in exchange for billions in bailout loans, have crushed the economy. Greeks are now poised to elect Syriza, a leftist party that calls austerity “fiscal waterboarding.”

“Europe’s austerity experiment has failed,” says Christoforos Vernadakis, a pollster running for Parliament on the Syriza ticket. “And as a result, the old political parties — viewed as tools of this austerity policy — have fallen apart.”

Syriza says Greeks must ask for debt relief, something Germany — the biggest Eurozone lender — has rebuffed.

But that attitude may change if Syriza wins, especially if another hard-charging anti-austerity party, Podemos, comes to power in Spain (another troubled European economy).

It seems that the wind of democracy are now blowing hard through Europe.