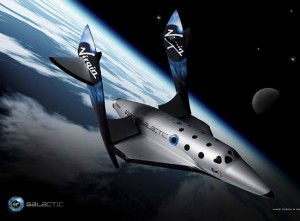 It has been science fiction for decades, but we are finally about the start launching regular, commercial space flights.

Virgin Galactic’s rocket plane, SpaceShipTwo a brainchild of Virgin’s founder Richard Branson, is based on the Ansari X prize-winning SpaceShipOne, a solution to a challenging problem: How do you create a ship that can transport visitors to outer space and return them to earth safely, frequently, routinely and relatively inexpensively? Even NASA’s space shuttles only went up 135 times in 30 years, far less than the space agency had planned.

The first challenge is getting it aloft. NASA’s space shuttles were lifted by rockets; SpaceShipTwo is jet-powered by an aircraft called White Knight Two, taking the spaceplane to about 50,000 feet. SpaceShipTwo then fires its RocketMotorTwo, a hybrid rocket engine powered by both solid and liquid fuel to reach supersonic speeds and make it the rest of the way to space (about 62 miles above the earth).

Passengers will get to experience about 5 minutes of no gravity before re-entering out atmosphere on the journey back down to the ground.

There is currently a list of more than 600 people waiting to fly, including Stephen Hawking, Tom Hanks, Ashton Kutcher and Katy Perry – and the privilege costs as much as $250,000. NASA is also waiting in the wings with experiments, although I’m not sure if they have as much clout as Ashton Kutcher.

Richard Branson hopes to being flights as early as this year.