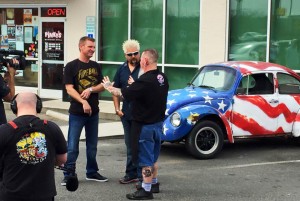 Guy Fieri from the hit show, Diners, Drive-ins, and Dives on the Food Network has just been spotted in Charlotte, along side NASCAR driver Clint Bowyer and a full camera crew at Charlotte’s Pinky’s Westside Grill.

The popular and eccentric host was spotted filming shots both inside and outside of Pinky’s.

Famed NASCAR driver Clint Bowyer joined the entourage presumably from the request of either food network or Guy Fieri himself.

Fieri has been personal friends with Greg Auten (Pinky’s chef) since interviewing him while he was at Plaza Midwood’s former Penguin Drive-In. The Penguin was featured on an episode of Diners, Drive-Ins and Dives that aired in 2007.

Photos of Auten with Fieri, Bowyer and the film crew at the restaurant can be seen on the Pinky’s Facebook page, and Fieri himself tweeted photos from Charlotte Motor Speedway.

The owner of Pinky’s noted that his restaurant and the speedway weren’t Fieri’s only stops in the Charlotte region, so we are likely to see at least a few other restaurants featured on upcoming shows.