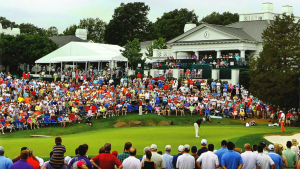 The PGA Tour is officially in Charlotte this week for the Wells Fargo Championship Tournament. Many of the biggest names in golf will be here competing for a total purse of $6.9 million.

Last week, the #1 ranked golfer in the world, Rory McIlroy committed to play at Quail Hollow, which attracted a couple more of the greats, including; #3 Henrik Stenson and #5 Jim Furyk. Those names are in addition to crowd favorites Phil Mickelson and Adam Scott, who are also on golf’s top 20 list.

The PGA Championship itself will be coming to Charlotte in 2017, securing Quail Hollow on list of major golf courses in the US. The last three holes at Quail Hollow have been unofficially named The Green Mile, and is now considered one of the hardest endings on the PGA Tour.