The 2012 report about the terrorist attacks in Benghazi, Libya, determined that the CIA and U.S. military responded properly and that Obama administration “talking points” were flawed, and questioned weather US officials intended to mislead the public.

The multi-year investigation that was spearheaded by the republican majority suggested serious misconduct by the Obama administration.

But their real reason for the investigations are much more troubling; 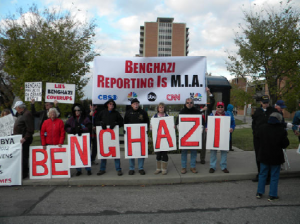 Among other findings, the report concluded that a CIA response team hadn’t been ordered to “stand down” after an assault began on the U.S. compound, and didn’t delay a rescue operation.

The report also said there had been no intelligence failure prior to the attacks, and that intelligence on those who participated in the attacks “was and remains conflicting” concerning their identities, affiliations and motivations.

The panel said the CIA received all U.S. military support available at the time in the region, and said the military didn’t miss a chance to perform a rescue operation.

The deaths in the attack of U.S. Ambassador Christopher Stevens, of Foreign Service Officer Sean Smith and of CIA contractors Tyrone Woods and Glen Doherty touched off months of acrimony over the lack of security for the U.S. facilities and spurred charges of misleading information.

Panel members said they have “endeavored to make the facts and conclusions within this report widely and publicly available so that the American public can separate the actual facts from the swirl of rumors and unsupported allegations.”

The issue is certain to be raised in the 2016 presidential race if Democrat Hillary Clinton , the secretary of state in 2012, decides to run. GOP attacks over Benghazi have focused on Mrs. Clinton, as well as on Susan Rice , then the U.S. ambassador to the United Nations and now the White House national security adviser.

Ms. Rice, appearing on television news programs a week after the Sept. 11, 2012, attacks, described the events in ways later found to be inaccurate.

The report Friday found that while public statements by Ms. Rice and other U.S. officials eventually were proven wrong, the inaccuracies stemmed from poor intelligence rather than manipulation of the information.

Much of the report deals with the intelligence behind the talking points, because the committee focused on the role of intelligence agencies in the attacks.

Early intelligence indicated that the attacks evolved from a protest, the report said. Other available early intelligence—which turned out later to be correct—didn’t assert there had been a protest.

Nonetheless, the CIA initially assessed that the attacks grew out of a protest, the House report said. The CIA changed its initial assessment nearly a week after Ms. Rice appeared on Sunday shows to discuss the event, determining there had been no demonstration.

The report found that analysts received 21 reports that a protest occurred in Benghazi, including 14 from public reports and others from the CIA, the Defense Department and the National Security Agency.

In a statement, Rep. Mike Rogers (R., Mich.), the committee chairman, and Rep. C.A. “Dutch” Ruppersberger (D., Md.), the senior Democrat, said the report stemmed from “thousands of hours” of investigation, including interviews with senior intelligence officials and security personnel and an extensive review of documents and intelligence assessments.

“Based on the testimony and the documents we reviewed, we concluded that all the CIA officers in Benghazi were heroes,” Messrs. Rogers and Ruppersberger said.