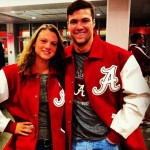 A swimmer from the University of Alabama, John Servati sacrificed his own life for his girlfriend during this week’s tornado.

Anna Rae Gwarjanski, another swimmer from Alabama commented, “John Servati died a hero, he held up a concrete wall long enough for his girlfriend to get out from under it before it collapsed again on him.”

Officials would only say Servati, 21, of Tupelo, Miss., died after a retaining wall collapsed in his home in Tuscaloosa.

Servati competed in three events at the Southeastern Conference championships last year. He was a dean’s list student and was named to the SEC Academic Honor Roll.

He will always be remembered as a true model of love, humility, and selflessness, even his last tweet was focused on others;