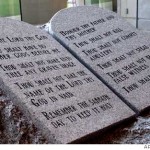 U.S. District Judge James Parker just passed a law that would require New Mexico city to remove a historical monument that has the Ten Commandments inscribed on them.

Yet, it seems his decision was decided in an unusually quick manner;

The suit was filed in 2012 on behalf of two Bloomfield residents who practice the Wiccan religion. But just this past Friday, a close attorney was charged with bribing other federal judges.

Prosecutors say Solis was one of many attorneys who paid for favorable pretrial rulings from Limas.

It now appears that Solis also had very close affiliations with both District Judge Parker, as well as having strong ties to the American Civil Liberties Union. It is not know for sure at this point whether or not Solis paid off Judge Parker to have the 10 commandment statue removed, but it certainly seems likely.