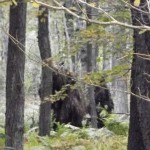 Spottings of Bigfoot are on the rise in Tazewell County, especially on the eastbound lanes of U.S. Route 19/460 around the Cliffield area. That’s where Jack Howery’s 8 foot-tall wood carving of Big Foot stands. 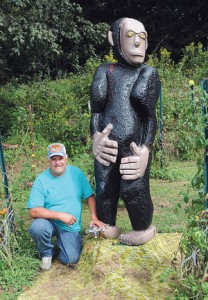 The inspiration for his latest giant wood carving came from Tazewell, Va., attorney Fred Harman who suggested a Big Foot carving to him at the recent Tazewell County Fair that ended a couple of weeks ago.

He went to the Tazewell County Public Library, researched photos reported to be of the creature, and created an image based on the one he felt was the most accurate.

The statue weighs about 800 pounds. “Big Foot’s gotta have big feet and big hands in my way of thinking…You can see where an old deer hunter shot him last fall in the shoulder and he got his toe stuck in a trap, but that wasn’t enough to stop him.” Howery recently commented.

Howery said he has been carving since he was 15 years old. “My daddy was a logger, I’ve been working with wood since I was little.” he remarked.