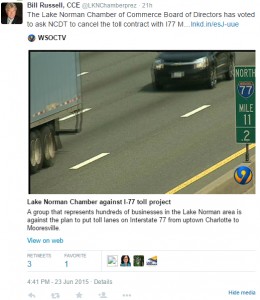 The NCDOT’s new $650 million plan to add toll lanes to the main artery between Charlotte and Lake Norman is being opposed by almost every local business leader and politician. If passed, the plan would force taxpayers to contribute an initial $95 million for the project.

The Lake Norman Chamber of Commerce recently sent out a survey to its members, asking what they thought about the new toll lanes on i77. 94% of respondents were against the toll lane project.

Based largely on the responses from their members, the Lake Norman Chamber of Commerce has now officially called the NCDOT to cancel their contract unless an alternative way to widen the interstate was proposed.

This decision came only a week after Sen. Jeff Tarte, from Cornelius, announced a bill that would defund the Lake Norman-area project.

Charlotte-area business and political leaders are planning to make a bus trip to Raleigh early next week to meet with lawmakers. “Every single person in Raleigh, with the exception of Sen. Tarte, hears the DOT side of this. They’re not hearing from the business community that’s going to be impacted by this for five decades. We want to have an opportunity to explain.” remarked Mecklenburg County commissioner Jim Puckett.

If you would like to sign the petition against the i77 toll lanes you can find it here on Change.org