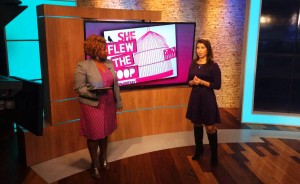 She Flew the Coop follows four women who left something secure or stable to travel abroad and pursue a dream.

The journey starts with Sarah Batista, a single mom and former TV news reporter who left behind a decade-long career in 2013 to follow her “gut” and launch her own video/film production company, Stories to Inspire.

Sarah has always dreamed of becoming a documentary film director and after much hard work and perseverance her dream is becoming a reality!

In the full documentary, Sarah documents her own restlessness, fears and life-changing decision to downsize her life, sell her home and most of her belongings in Charlotte, NC to travel and interview three other women who “Flew the Coop” at one time or another.

It focuses on the question of “what would you sacrifice to pursue your dreams?” and delves deep into the fear and issues that keep women from going for it!

Some of the questions asked include;

What led up to you “flying the coop”?

What did you sacrifice?

What happened when you left?

Was it worth it?

What impact are you making?

What was your worst fear? What brings you the most joy?

What is your advice to other women?