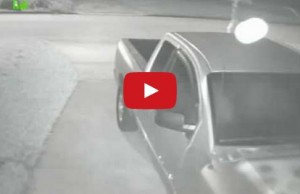 A Rock Hill man believed that recent “strange activity” could possibly be from alien origin, his evidenced included an unidentified flying object and three holes in his yard. This past weekend, he reported the incident to York County deputies.

He told the deputies that there was a history of break-ins on his property, then he showed the Rock Hill officers his surveillance cam video of a “small bright ball fly on screen, hover for a few seconds, then fly off again.” The man also brought the officers to his yard where he claims three mysterious holes mysteriously appeared in his yard, he commented that the grass was “pressed down in a circular pattern.”

Rock Hill officers proceeded to tell the man that they saw “nothing criminal” about the video or the marks in the yard.